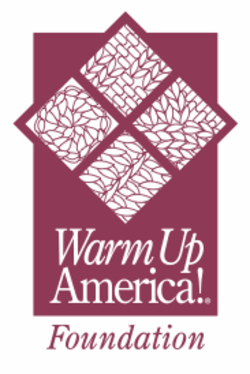 National charity Warm Up America! celebrates 30 years of providing warmth
to people in need
Anniversary honors legacy of the late Evie Rosen, WUA!’s founder and a
nationally recognized philanthropist
A group of knitters and crocheters assemble at a local community shelter and hand out colorfully unique clothing and blankets to people in need. Events like this have taken place in communities  all over the county for years. If they happened in the last 30 years, chances are they were sponsored by national nonprofit Warm Up America!
Warm Up America! (WUA!) was founded by Evie Rosen in 1991. Evie enjoyed making blankets for the homeless, but found she couldn't fulfill the need fast enough. Her vision was to provide an innovative way for donated 7” by 9” knitted and crocheted sections to be joined together to make finished blankets.
This seed of an idea has blossomed over the years into a national program that has provided comfort and warmth to thousands of people during their most difficult of times, earning Rosen recognition by TIME Magazine and endorsements by Oprah Winfrey and Vanna White. Over one million items have been donated by 20,000 volunteers since 1991.
“Warm Up America! touches us at our core in a time when we’re all looking for things that are meaningful,” expressed Mike Rosen, Evie Rosen’s son. “There aren’t many things that move people so deeply, whether you’re the giver or the receiver. It is even more meaningful knowing these blankets arrive in the arms of individuals who are experiencing some of the lowest points in their lives.”
This year is WUA!'s 30th anniversary and to celebrate, the organization is promoting a year-long fundraising campaign to raise awareness for its cause. The charity encourages volunteers to donate $30 or more to reach a goal of $90,000 - which would cover almost two years’ worth of expenses for WUA! Every volunteer who donates $30 or more will receive an exclusive 30th anniversary pattern bundle that includes 90 new knit and new crochet 7” by 9” section patterns.
There are other ways to support WUA! too besides donating money, like by purchasing exclusive 30th anniversary t-shirts and tote bags or by donating hand-knitted and crocheted blankets, clothing and accessories. Every donation helps WUA! continue its mission of spreading warmth across America.

ABOUT WARM UP AMERICA!
Started in a small Wisconsin town with neighbors knitting and crocheting afghans for people in need, Warm Up America! is a charity that has warmed people’s lives since 1991. Founder Evie Rosen came up with the idea of having volunteers knit or crochet small sections and others joining them together into blankets, which quickly caught on. Thanks to the generosity of knitters and crocheters around the country, today Warm Up America! distributes warm blankets, hats and other items to tens of thousands of people in need.
by PressKitHero